The Trade Union Congress of Nigeria (TUC) in Bayelsa, has urged the federal and state governments to pay more attention to workers’ well-being and security in the efforts to build a stronger nation.

The state chairman of the congress, Mr Tari Dounana, made this disclosure to newsmen on Tuesday in Yenagoa.

He said that members were worried about the delay in the implementation of the new minimum wage already signed into law by President Muhammadu Buhari.

“Yes, for the implementation, we believe that it started from April but we are yet to see it. We want the federal and state governments to pay serious attention to workers welfare.

“The government also needs to give more attention to the issue of insecurity that is currently ravaging the country.

“We, as citizens, must work together to overcome the security challenges because, in togetherness, we can achieve a progressive Nigeria.

“The unity of the country can never be negotiated; we must hold the bond together to overcome every form of challenges that we are facing.

“Development cannot occur in an atmosphere of insecurity,” the chairman stated, even as he described workers as the ‘engine of the economy’ of any nation.

Dounana urged the federal government to fast-track efforts to implement the N30, 000 new minimum wage and stop gambling on the workers’ emotions.

“The average workers have patiently waited for too long, and some have even died in the process; though, the government says it is working to put the structures for the implementation in place.

“I am still urging the workers to be a bit more patient, let us still give government some time, so that it can come out with a structure that will be acceptable to all,” Dounana said.

Big Brother Naija star Nengi has been appointed the senior special assistant (SSA) on the girl child to the Bayelsa...

A Bayelsa State based Female Welder Faith Lesley, Buys A Car to Mark her Birthday party coming up on. As... 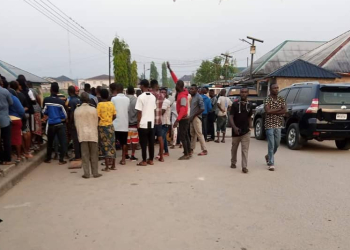