Oja Oba/Mapo Court C Customary Court, Mapo, Ibadan, Oyo State, has adjourned till September 16, judgment on the divorce suit brought before it by a man, Akintayo Kalejaye against his wife, Funmilayo Kalejaye.

Akintayo alleged that his wife was disobedient, disrespectful and troublesome. He added that she was adulterous and thus prayed that an end be brought to their union.

Funmilayo readily agreed to divorce when the claim was read to her.

“My lord, my marriage to Funmilayo had already hit the rock. All I want is an official document to back our divorce.

“Fumilayo was full of atrocities. She was a difficult person to live with. She made our marriage hell. My lord, she almost killed me.

“She failed in her duties towards me as wife and our children as mother because she was never at home. She had no regard for me and derived pleasure in flouting my orders.

“My wife was indifferent to our welfare. She was in the habit of leaving home early and returning at whatever time she liked. Funmilayo didn’t care if we ate or not. She was also not concerned about our children’s educational pursuit.

I endeavoured to pay their school fees but she failed to supervise their studies and monitor their academic performance in school. All she knew to do was to find fault in the administration of their school, complain and quarrel with their teachers.

“My lord, Funmilayo was in the habit of nagging. We lived like cat and mouse. It got to a point that I preferred she was not at home because she was always looking for every opportunity to fight me.

“Funmilayo is a harlot and feels more at home with strange men. She is a night crawler and was in the habit of attending clubs and parties with her lovers whom she would later go home and spent the night with. She sometimes brought them home when I was out of town.

“Since I knew my life was no longer safe with her, I purposely restrained myself from having anything intimate to do with her which strained our relationship. She moved out of my house as a result of this.

“I have stopped loving my wife a long time ago. I need her no more. I pray this court to end our union and hand over our children to me for adequate care, “the plaintiff stated.

“My lord, my husband was fond of boasting to be the head of the home but never bore any responsibility in the house.

“He neglected me and our two children and never cared if we starved to death.

“He constantly dodged his responsibility of paying the house rent. I took it upon myself to pay the annual rent in order to avoid my family being embarrassed or thrown out by the landlord.

“My lord, my husband is a womaniser and has a high libido. He has strings of lovers who meet his sexual urge. These include one of our tenants. His affair with these women tore us apart and put a strain in our relationship.

“Akintayo, not yet done, took another wife and hid this from me. I got to know few years later through his friends, “the defendant told the court.

“My lord, Akintayo is diabolic. Shortly before I moved out of his house, he sought the assistance of an herbalist in Ijebu Ode who cast a spell on me. The spell is to make me unattractive to other men.

“No man has approached me for a relationship since I left him two years ago. I pray this court to help appeal to him to revoke the evil he has done to me so that I can make progress in life, “Funmilayo pleaded.

The court president, after hearing both parties stated that more evidence would be needed. 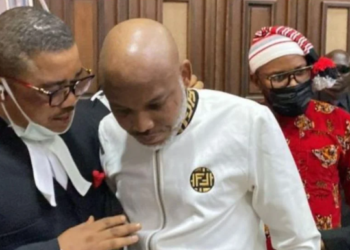 The Federal High Court in Abuja has backed down on the harsh restrictions set on the trial of Nnamdi Kanu,...