Big Brother Titans begins! | All You Need to Know Today About the entertainment show

The first season of Big Brother Titans gets underway today with viewers across the African continent set to be tuned in for the maiden instalment of the TV reality show.

The show is a fusion of the South African and Nigerian versions of the Big Brother franchise; and is expected to be explosive with spellbinding entertainment.

With the countdown to its start ticking, here are all you need to know about the show:

The winner of the show will walk home with a grand prize of $100,000 with other housemates to also win mouth-watering prizes during their stay in the house.

The show will treat viewers to undiluted entertainment for 10 weeks with intriguing drama, exciting talking points from friendships and situationship, captivating games, shocking evictions, attachments, alliances, frenemies, and so on the show is reputed to giving viewers.

Being a blend of selected housemates from Nigeria and South Africa, the host country for this year’s edition is the latter.

Nigeria’s famous OAP and Big Brother Naija serial host, Ebuka Obi-Uchendu will host the show alongside South Africa’s renowned actor, OAP and Big Brother Mzansi’s host, Lawrence Maleka. They are reputed as two of the finest comperes in the continent of Africa and are set to entertain viewers with their mesmerizing presentation skills.

Big Brother Titans will be aired on DSTV Channel 198 and GOtv Channel 29.

As usual, the viewers on DStv and GOtv will be able to vote via their MyDStv and MyGOtv Apps to keep their favourite housemates on the show.

Each viewer’s subscription package will determine the number of votes they can access in each voting cycle.

The BBTitans winner, who will walk away with a life-changing grand prize of $100,000 cash, will be decided by viewers’ votes across Africa after 12 weeks on the show.

“BBTitans is a special edition of the widely loved Big Brother show that will have Nigerians and South Africans in one house.

“We can only imagine that there will be an explosion of entertainment and intense drama, unlike anything viewers have ever seen before. Imagine Afrobeats and Amapiano, the food, and everything else we’ll see in this edition. 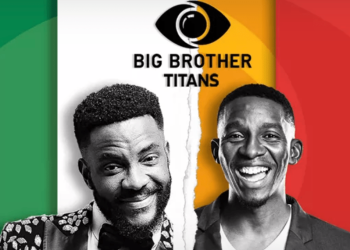 Big Brother Naija is a reality show in which contestants live in an isolated house and compete for a large...

Big Brother Fines Ozo, Nengi Again over Microphone infringement after their were seen chatting in low tones. The big brother...

Fake Apology!! Erica Apologizes to Housemates as Eviction Draws Near.

After releasing threatening words against Laycon last night, Erica apologizes to all the housemate as live eviction show draws near....