BIG BROTHER TITANS : All You Need to Know about the upcoming show starting January 15th with Ebuka Uchendu

Organisers of the highly anticipated Big Brother Titans TV reality show, Multichoice Nigeria, have announced January 15, 2023, as the takeoff of the show.

The Big Brother Titans edition is sponsored by Flutterwave, Bamboo and Lotto Star and will be held in South Africa.

Dr Tejumola said the show would feature Nigerian and South African housemates while the winner would get a $100,000 cash prize.

The Chief Executive Officer of MultiChoice Nigeria, John Ugbe, revealed that the BBTitans edition would run for 72 days.

He said: “The ‘Big Brother Titans’ is a special edition of the widely loved Big Brother show. This special edition is a fusion of two TV phenomena— BBNaija and BB Mzansi. We are bringing housemates from two giant nations— Nigeria and South Africa, under one roof to give African entertainment audiences a show of intense drama like never before.

It promises an abundance of Nigerian and South African swag, banter, romance, and everything in between”.

Ugbe also said viewers’ votes would determine the winner and help keep their favourite housemates on the show. 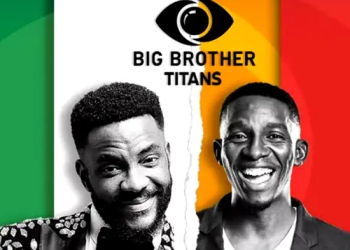 Big Brother Titans begins! | All You Need to Know Today About the entertainment show The first season of Big... Big Brother Naija is a reality show in which contestants live in an isolated house and compete for a large...

Big Brother Fines Ozo, Nengi Again over Microphone infringement after their were seen chatting in low tones. The big brother...

Fake Apology!! Erica Apologizes to Housemates as Eviction Draws Near.

After releasing threatening words against Laycon last night, Erica apologizes to all the housemate as live eviction show draws near....

Carabao Cup: List of 7 clubs that qualify for quarter-finals