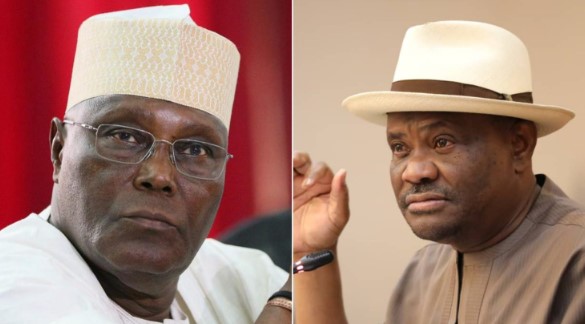 A Federal High Court in Abuja will on Wednesday (today) hear a suit said to have been instituted by Rivers State Governor, Nyesom Ezenwo Wike, seeking the disqualification of Atiku Abubakar, candidate of the Peoples Democratic Party (PDP) from the 2023 presidential election.

The suit marked FHC/ABJ/CS/782/2022 and jointly filed with one Prince Michael Newgent Ekamon is billed to be heard by Justice Ahmed Ramat Mohammed, a vacation judge for the court.

At the time of this report, about seven Senior Advocates of Nigeria SANs have arrived the courtroom for legal fireworks in the case.

Several political sympathisers from various political camps have also arrived the courtroom to witness the proceedings.

wike says atiku should step down

It was, however, not clear whether the governor would opt out of the case having dissociated himself from the suit when the case became public.

Wike is said to have sued Atiku; the Sokoto State Governor, Aminu Tambuwal; and the PDP over the conduct of the presidential primary of the party that was held in Abuja on May 28 and May 29, 2022.

In the originating summons, Wike and his co-applicant asked the court to determine eight issues, including whether the purported transfer of Tambuwal’s votes to Atiku by the PDP was illegal and void.

The plaintiffs asked the court to determine if Tambuwal lost his claim to votes the moment he stepped down for Atiku.

He asked the court to determine whether Tambuwal “having stepped down during the primaries ought to lose his votes.”

Wike and Ekamon are asking the court to grant nine reliefs, including a declaration that the purported transfer of Tambuwal’s votes to Atiku be declared null and void.

However, at the time of this report, Justice Mohammed was yet to arrive.