Robbers struck again in the early hours of Sunday at a hostel of the University of Ibadan.

This attack is exactly a month after a similar operation on Shell Hall, a female hostel of the premier institution.

A post graduate student, who spoke on the condition of anonymity, stated unmasked young men charged into New hall at about 2:10am.

According to her, they had to axe down the door leading to the hostel containing four blocks, two of which accommodate males and the other two, females.

“They had a struggle entering into the hostel because the security in New Hall is actually tight.

“The bang we heard when the door was axed down already told us that something was coming for us.

“But we didnt know what it was and we were wondering where the securities and potters were at this time,” She informed.

Our source revealed that only two of the 15 rooms on the ground floor were not affected.

“On the ground floor where I stay only two rooms were not affected, the rest were.

‘I don’t know what happened on the first floor, but so far, I’ve heard that three rooms were affected.”

The robbers were said to have demanded for phones, laptops and money.

According to our source, one guy whose iPhone was collected put up a struggle with the robbers and sustained a machete wound.

“He was rushed to the health centre,” she stated.

Our source revealed that the robbers took to their heels at the approaching sound of sirens.

It wasn’t until after the operation that students found where the security officials and hostel workers were tied up and gagged, our source revealed. 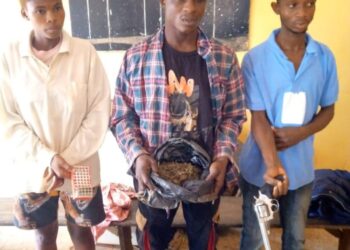 An angry mob on Monday night reportedly set a member of a four-man armed robbery gang on fire at the...

A gang of armed robbers known as One Million Boys have threatened to attack neighbourhoods in Lagos as revealed in...