The Chief Of Army Staff (COAS), Tukur Buratai, has said the game of golf is another form of military training, which could help the Nigerian Army personnel in tackling the current insecurity in Nigeria.

According to Mr Buratai, soldiers’ fitness could be fully kept through the regular playing of golf. He said it could also add the value of patience among soldiers and self-improvement in the discharge of military activities.

Mr Buratai gave the charge over the weekend at the commissioning of the remodelled Rhino Golf Club, 3 Division of the Nigeria Army, Jos.

The army chief, who was represented by John Malu, Commander, Corps Engineers, called on men and officers to fully take part in the golf game.

He said, “The game of golf is all about ethics and tradition just as the Nigeria Army. It is a game that brings people of all works of life together.

“I always tell people that no game can surpass golf because the game has nothing to do with age.”

Mr Buratai stated that it was in realisation of the importance of golf that he recently directed the establishment of Eagle Golf Course in Musa Yar’adua Barracks in Abuja so as to encourage Nigerian Army officers to register as members.

The army general, however, commended the General Officer Commanding 3 Division, Nuhu Angbazo, a major general, for his commitment towards the renovation of the Rhino Golf Course which could stand among the best in the country.

“I commend all efforts in rehabilitating and renovating the golf course.

“This will further encourage golfers in and around the state and the country, in general, to always come for kitties and tournaments,” he added.

Responding to the development, Mr Angbazo said the renovation and remodelling of the golf club was made possible by the army chief who did not only approve but also made available the funds.
The GOC further said that since the resuscitation of the Rhino Golf Club, the number of members has been on the increase. 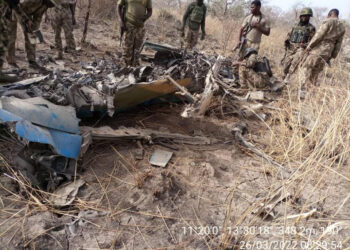 The Army on Saturday March 26, said it has uncovered the wreckage of the crashed Alpha Jet aircraft (NAF475) that... Buratai urges troops to brace up for final defeat of insurgency

The Chief of Army Staff (COAS), Lt.-Gen. Tukur Buratai has tasked troops in the north east theatre of operation to...