The Former governor of Edo State Adams Oshiomhole in his Iyamho country home on Tuesday lamented the political crisis in the state.

The National Chairman of the All Progressive Congress also lamented the alleged betrayal by his political son Philip Shaibu, who is the deputy governor of the state.

Addressing a group, who paid him a solidarity visit in his house, Oshiomhole urged the people to continue to embrace peace and not allow themselves to be used for the wrong reasons because of money

FULL VICTORY FOR APC IN OSHUN

He also advised them to continue to support the Muhammadu Buhari government.
He said, “The only thing I will say today to anyone who is here who is an agent of my son, when I talk of my son I am talking of Philip Shiabu who now thinks that his own political future requires that he attacks me and import thugs to disgrace me in my
village.

The Hausa have a saying that when people
are possessed and they do things like that, just say
God take control.

Supposing I was dead after 2016
and somebody tells me that my son Philip will organise people to attack my house or to attack my village to disrupt the convocation maybe my body
will be turning in heaven and I will not believe but the fact that I am alive to see someone who did not win his own booth because his own people in
his own village in his own community of Jattu did not want him because they apparently know him better than me but I stood by him, I stood for him
not on false stand and he became deputy governor
so if all that transpired now is to use that power to
humiliate me but God forbid.

As you can see, who
can fight the battle, it is only God so I leave the
burden of guilt to them and I will not repay evil with
evil, I will stand on the path of peace.”

Shaibu speaking through his Chief Press Secretary,
Musa Ebomhiana, Shaibu said he had respect for
Oshiomhole.

Ebomhiana said, “So, he could not have betrayed
him in any way. Rather, in all sense of
responsibility, I will say that the Deputy Governor is
following the path set by his political godfather. 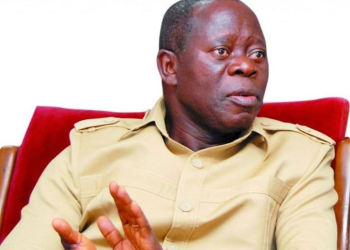