Olubunmi: Why I am committed to educating the under-privileged’

Olubunmi: Why I am committed to educating the under-privileged’.

Olubunmi is the founder of ‘Help for School Foundation’, which she described as a philanthropic organization providing quality education to economically weaker sections of the society. Among other things, the Foundation, its founder said, swaps old and damaged schools items for new ones under the ‘Project Swap’.

Help for School Foundation was founded in June 2018 as ‘Save a School NG Initiative’ and became fully incorporated as a Foundation in July 2019.

Olubunmi said the idea was conceived after she embarked on a documentary photo project to show the disparities in the learning environments of children in Lagos State during a photography master class organised by Dream Development Centre of the Live Your Dreams Africa Foundation.

Also read Tekno will be a scape goat

During the project, she carried out some researches and chose to showcase two schools. The one in a very bad state was Funmiland Nursery and Primary School, a dilapidated, low-cost school located in Amukoko, a densely-populated slum-like community in Lagos, built with planks and could pass for a poultry. The second school was Jason Tender Care School, a private school located at Adeniran Ogunsanya, Surulere, Lagos.

She said, “I noticed during my studies that the greatest ill that has plagued man is man’s inhumanity to man. I told myself I’d be better fulfilled if I am able to do something for people, especially those that cannot repay the deeds. So I concluded humanitarian service will definitely be a major part of my life’s activities.

“The yearning to help the underprivileged school became strong in my heart, so I decided to do something about it. I placed the idea on my Whatsapp and some friends showed interest. That was how we launched out initially as Save a School NG, which was supposed to be a one-off project, but is now fully registered as an NGO named ‘Help for School Foundation’”.

On how her Foundation has intervened so far in the affairs of the needy, Olufunmi explained, “Funmiland School has a population of over 200 children. Our interventions included upgrading old dilapidated school blackboards to new magnetic white boards and changing old furniture to new ones. We also gave them a new office table, a hanging book shelf and a new industrial standing fan to replace the small faulty one they had. We changed their improvised wooden tennis table to an actual outdoor tennis table to enhance their recreational activities.

“We also sent books to the school to improve their library as we constantly solicit used books from well-wishers. The Foundation recently paid school fees for seven pupils who performed well in the last academic year. We are preparing for our back-to-school project to assist the children with some basic educational materials like school bags and writing materials. All of these we were able to achieve through support from our sponsors.”

Olubunmi said she supports her Foundation with earnings from her event management and production company, BBvibrant Creations. She also co-owns and manages a content production start-up called Trobz media. 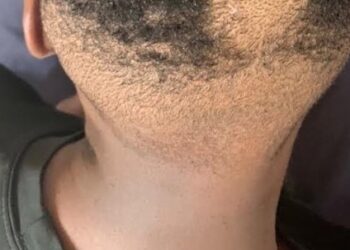 Dr. Olunri, a Biotechnology lecturer at Bells University, Ogun State, went an extra mile to caution a student for keeping...